Does a bidder have a low score? There are several factors that can contribute to this.

Written by Ciara Martin
Updated over a week ago

ℹ️This feature is only accessible to Admins and Viewers.

The AiQ Bidder Engagement Score algorithm helps determine which bidders are highly likely, or not likely, to complete their due diligence without dropping out of the process.

Our machine learning algorithm is based on benchmarking bidders in Rooms who are conducting full due diligence processes in competitive deals. There are certain factors that can impact the AiQ Bidder Engagement Score.

Factors that affect the score

This feature is activated when the Transaction type for the Room selected is Merger/Acquisition/Divestment or Bankruptcy/Insolvency. If the deal Transaction type has been incorrectly selected, the data provided on the AiQ Bidder Engagement Score will not be accurate.

Learn how to change the Room Transaction type here.

If the Transaction type has been incorrectly selected as Merger/Acquisition/Divestment or Bankruptcy/Insolvency, the AiQ Bidder Engagement Score email will be triggered. However the information given on the report will not be accurate as other deal types have not been benchmarked.

If the process only has one bidding party in the Room, it is more common for the information to be released in a series of stages. The AiQ Bidder Engagement Score may be artificially low due to a lack of competitive tension and files being released over a period of time. The data that was analyzed and benchmarked for the AiQ Bidder Engagement Score was based on deals with competitive tension.

Early stages of a competitive transaction

If the Room is in the early stages of a deal, where the decision has been made to provide the Information Memorandum and a small collection of other documents within the room to potential acquirers before asking for Indicative offers, their AiQ Bidder Engagement Score would be low. The reason for this is that there would be a larger amount of Teams and a small set of files to be viewed.

If the target does not have a large volume of documentation, this may lead to a low AiQ Bidder Engagement Score as there would also be a lower level of activity in the Room.

If there is a zipped folder containing several documents uploaded into the Room, this may also contribute to a lower score. The Room can only produce a report when the zip file itself is was opened from the Document Index. It isn't possible to apply Security controls to zip files, and once they are saved, Ansarada cannot track engagement on these outside the room.

💡Tip: It is recommended to upload the files and folders as unzipped, so that Security policies can be applied. This will result in a more accurate AiQ Bidder Engagement score. Learn more about security here.

If Security controls have not been applied to files in the Room, Ansarada will not be able to track saved files, or files that have been Bulk downloaded. Therefore document views in the Room will not be accurately represented.

💡Tip: It is recommended that you apply Security controls to files to ensure reporting accuracy and control. Learn more about security here. 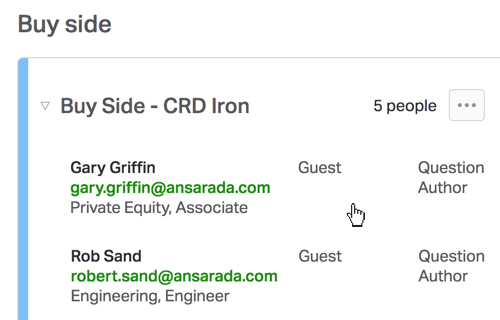 Activity outside the Room

Any documentation or activity outside the Room cannot be included in the AiQ Bidder Engagement Score.

Did this answer your question?